iHunt: Killing Monsters in the Gig Economy is a novel by Olivia Hill, edited by Filamena Young. 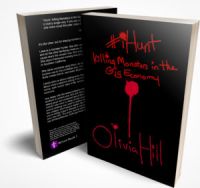 It's like Uber, but for slaying monsters! Lana is a monster hunter. She kills vampires, werewolves, demons and all the other terrifying creatures of the night. She doesn't do it because she's the chosen one. She doesn't do it because it's her duty. She does it because working one job just doesn't cut it for a millenial in Southern California. She takes contracts using iHunt, an app which freelance monster hunters use to find profitable prey. It's like Supernatural meets Uber, Buffy meets Airbnb, and sadly, Blade meets Fiverr. Lana's story is about making ends meet, about economic anxiety, and about what a person's willing to do to pay the bills. It's a equal parts horror, dark humor, slice of life, and social commentary on the gig economy.